How to Find Mad Allen’s Hole on Bickerton Hill, Cheshire 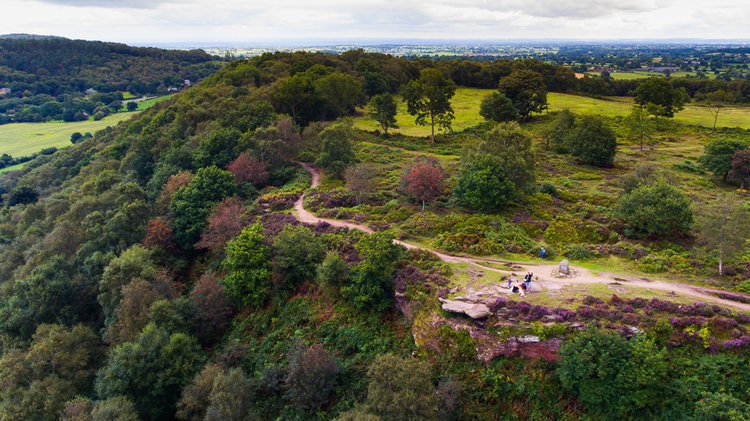 Sarah has been doing some serious research recently. After her success in finding Nant Mill she had another crack at finding somewhere awesome for us to explore. After hearing about all the stories and history around Cheshire we decided to set out on how to find Mad Allen’s Hole.

Bickerton Hill is part of the famous Sandstone Trail in Cheshire, UK. It is two hills made of sandstone at the south end of the Mid-Cheshire ridge. The lower part is known as Larkton Hill whilst the highest peak is known as Raw Head. There’s absolutely tons of history relating to Bickerton Hill and some areas of special scientific interest too, well worth reading up on. There’s also another brilliant little cave system nearby too, called The Queens Parlour. (Edit: I ended up multi-day hiking the whole trail as part of my training for the Anglesey Coastal Path).

Parked in a car park at the bottom of the hill we took the right hand path and headed up. Sandstone, grasses and heather surround you as you ascend a mild incline. This isn’t a place for buggies, I saw one all to relatable and familiar sight in a dad trying to drag one up and in turn looking to his partner for some non existent sympathy.

It’s no more than 10 minutes before we hit Kitty’s Stone, a monument with an inscribed poem on it. Here the view opens wide and you see across for miles of flat Cheshire farmland. It really is a stunning view. There is a crag drop by the view point, nothing too life threatening but be aware with kids.

This hike is all about finding the elusive Mad Allen’s Hole. A two storey cave that once was inhabited by a heartbroken hermit in the 17th century.

We continue heading along the crag following a GPS co-ordinate from the Geocaching app (get it!). The path has a partial split down to the left over the ridge and we followed it down through some of the overgrown bracken and brambles until we eventually found our mystery cave.

A boulder fell into the hole at some point, possibly in the same era as Mad Allen so it’s kind of difficult to spot, but you should be able to see the top of a loose wooden ladder. Using this you can descend down to the bottom (it’s about 3m high). Use it at your own risk, mkay.

Sarah went down followed by the kids slowly, whilst I held the ladder. You can see little cubby holes and shelve points in there which is pretty neat and an array of beer cans from the local youth. Jasper couldn’t get down sadly, too big too be carried that dog 😉

After emerging from the hole we headed back towards Kitty’s Stone via another small cove which had skulls carved into the rocks in there, super creepy! At Kitty’s Stone we had a picnic overlooking the awesome view.

We then decided to go and find Maiden Castle which instead of right from Kitty’s Stone is left along the ridge. This isn’t a castle, it’s the site of an old iron age fort and you can’t really make out much of the site but there is a few nice information points around with some drawings of what it would of looked like.

We actually ended up coming here twice, I’ve totally forgotten (I should write these trips up quicker!), because we didn’t find Mad Allens hole the first time. You can watch both days out here in our video logs. 🙂

Great walk out with lots of options for however far you want to walk.

6 of the Best Rechargeable Camping Lights