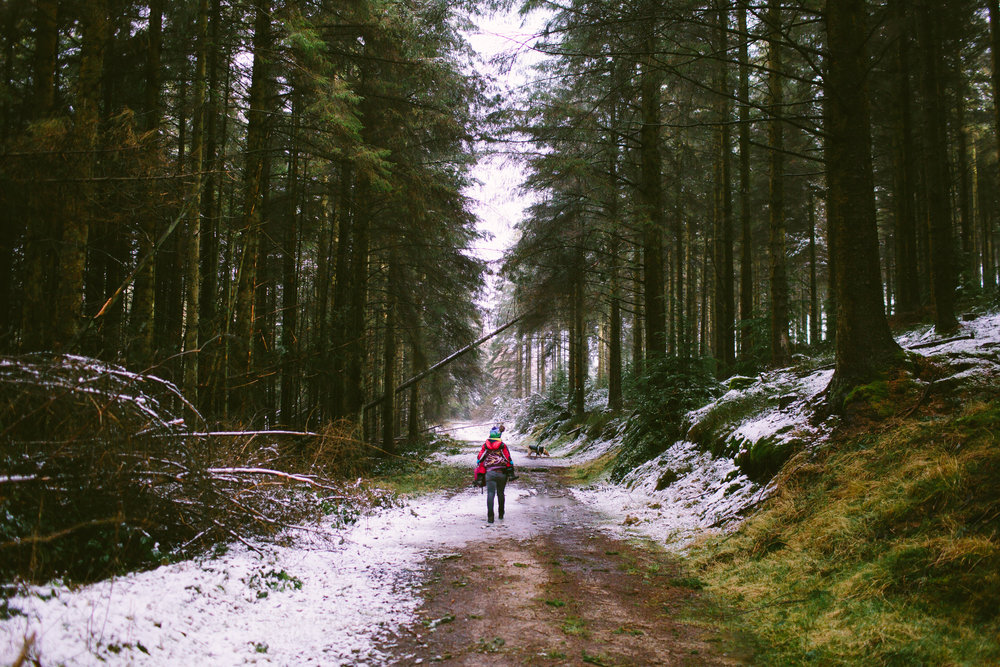 Clocaenog Forest is one of North Wales best kept secrets. Whilst Moel Famau and Loggerheads attract people from the North West in their thousands, many don’t realise how stunning and sprawling the 15000 acres of Clocaenog Forest are. Here’s a quick guide on how and why to visit Clocaenog Forest and a trip diary / vlog too.

Is Clocaenog Forest suitable for a Family Walk?

Yes, Yes, Yes! There are an absolute ton of different trails and paths running through evergreen and deciduous forest. It is mostly coniferous and home to the last of Wales’s red squirrel population. There are numerous circular trails of all distances. I’ve detailed below our trip to Pincyn Llys and the monument that stands on the highest point of the whole forest (414m).
I’ve taken my kids there a few times now. The walk itself is super short but pretty steep at one point. It’s not buggy friendly either but easily done with new walkers. If you grab the Ordnance Survey app (it’s an absolute bargain for the year subscription, we use it ALL the time) or the actual paper map of the area there are clearly lots and lots of parking spots and you can park at any and plot a quick walk. There’s the odd picnic bench too near the car parks.

You can send this map directly to Google Maps or view it in the OS Maps app.

What is Clocaenog Forest Postcode?

The postcode for Clocaenog Forest is LL15 2DF but you can use that Google Map above as well and pop that straight in your phone’s maps app.
This takes you to the little on-road car park at Pincyn Llys.

Where Else In Clocaenog Forest is there to Walk?

Coed y Fron Wyllt is located at the eastern end of Clocaenog Forest. It is a long, narrow woodland on a steep slope, hence its English translation of ‘the wood of the wild hillside’. It’s mainly ancient woodland which means it has been wooded since at least 1600. Nowadays it is home to a circular walk and a wildlife viewing hide overlooking a wetland. In spring the path through the woodland is edged with bluebells and primroses and the fragrance of wild garlic fills the air. There is a picnic bench halfway around the walk.

The History of Clocaenog Forest

Clocaenog Forest is named after the local village of Clocaenog, just outside Ruthin in North Wales. It’s part of the Hiraethog Forest which is part of Mynydd Hiraethog.

Pincyn Llys has a monument at the top of the highest point erected by Lord Bagot in 1830 to mark the planting of an enormous conifer forest. The forest was cut during the First World War and used to help the formation of trenches and mines. It was then replanted in the 1930’s.

Not all the history of Clocaenog is good. The “Clocaenog Forest Man” refers to a murder victim that was found in the forest in November 2015. The body had been there undiscovered for over 20 years despite huge police investigations.
You can read more about the police investigation here and some interesting findings and details here. It’s not the only horrible piece of history tied to the forest either. In 2005 a man handcuffed himself to a tree and threw the key away leaving himself to die.

Looking out of the kitchen window on an early Sunday morning and seeing torrential rain and wind isn’t the best of conditions to decide to pack the kids up in the car and head for the hills. Something drove us to do it anyway and for once we were rewarded with one of the most picturesque winter wonderland experiences we’ve ever had.
Now this doesn’t happen, well, ever in our experience.  So it’s a tough one to ‘sell’ to you if you’re looking to replicate this experience.

What’s great is that Clocaenog Forest is huge and full of separate wonderful trails to walk through. I’d really recommend just grabbing an OS map and having a look at all the different places to go, there’s numerous things that fit all weather conditions, abilities and group sizes. We plan to do a lot more there for sure.

We opted to go and find Lord Bagots Memorial which is on the summit of Llys y Frenhines next to a trig point just as you enter the forest from the North-East.

As we approached Clocaenog, it became pretty apparent that we were not going to get rained on but rather snowed on. The snow we thought had well passed us now after our jaunt up to the Devils Kitchen in Snowdonia previously. As the snow came down we were a little worried (I WAS VERY WORRIED ;)) that maybe there would be too much snow and the car wouldn’t make it up there. The road can be super treacherous, so don’t carry on if you don’t feel confident driving in those conditions (there are some nice low level walks I’m sure around).

We managed to park the car close opposite the path to walk up, got out, kitted up and headed out.
Luckily we packed waterproofs, a snow suit for Finn and a million pairs of gloves. (I’m writing a post on our winter kit as we speak).

The route we took is a bit mad and we decided to go ‘off piste’ and walk through the dense forest through the snow and off the path. We’re idiots. It proved really difficult, adventurous and fun, but difficult. I used the OS App to guide us through it, but we ended up getting onto the summit and seeing the monument but being unable to actual reach it because of masses of gorse.
Our advice would be to follow the circular path signs, the route is really well sign posted. If you want a quick jaunt just head straight up the hill from the car. The path is direct up hill to the monument and from there you can hop down the other side and take the circular path back.
The vast amount of trees, dense growth and crisp air are what makes this place wonderful. It’s super quiet and so big that its easy to not see anyone. We didn’t see a soul up there the whole day. It is a risk heading out in terrible weather, but sometimes it really pays off and can turn into one of the trips you’ll remember forever.

Clocaenog in the summer is definitely on the cards.

If you’re looking for other alternatives and good family walks you should definitely check out Bickerton Hill and Mad Allen’s Hole.

The Must Know Guide to Electric Hook Up - EHU