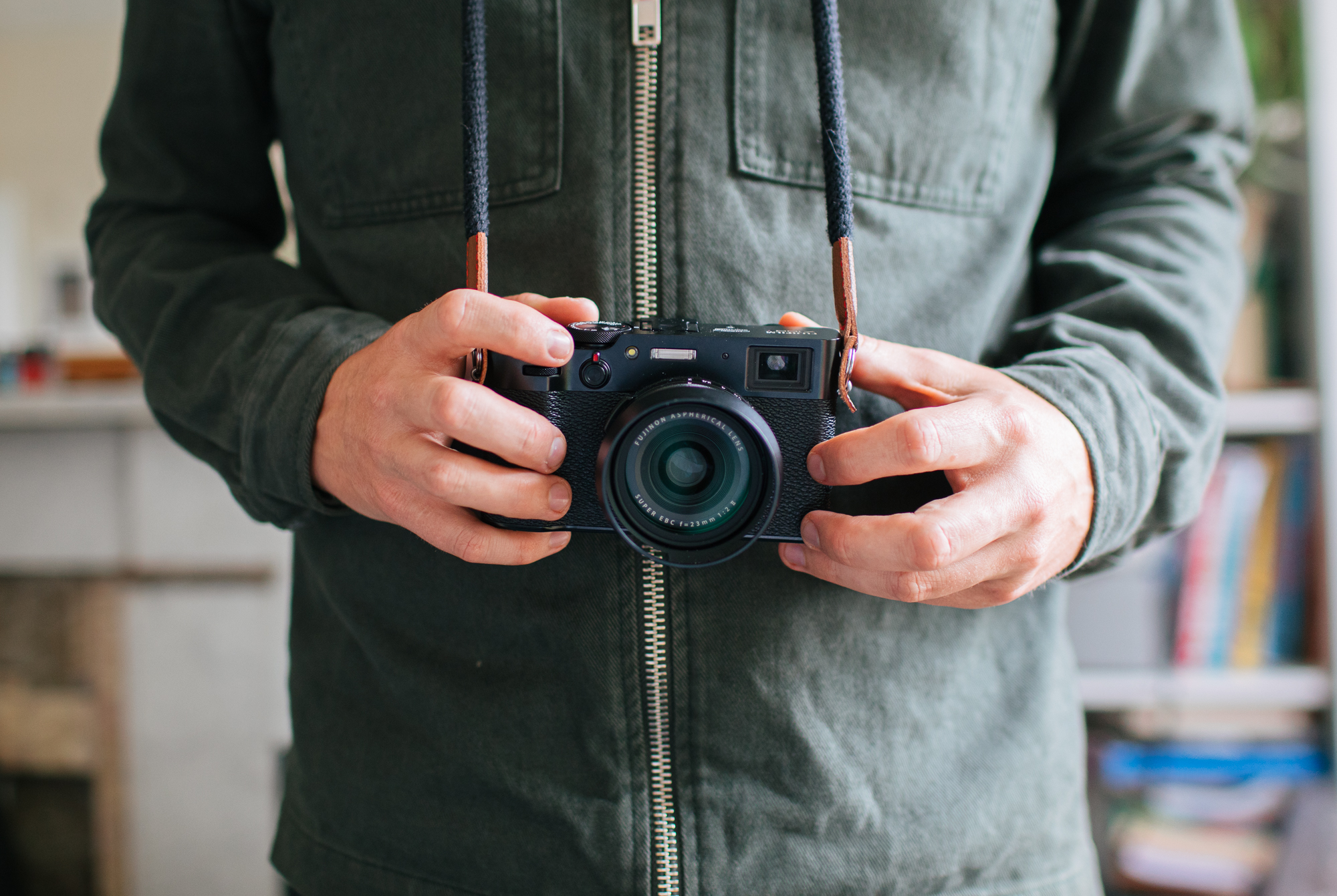 I recently picked up the latest version of the Fujifilm X100V. It’s the third edition I’ve owned and I am absolutely delighted to have one back in my hands. I love it, a lot. There are 5 Fujifilm X100v accessories that I have with it and a few more bits and pieces that you can grab to make yours work for you a bit better.

PS. I took a deep dive into the best camera strap for the Fuji X100v and picked out some really nice, innovative new straps that compliment the camera beautifully. Also, take a look at my best Fujifilm cameras in 2021 post for some new recommendations.

There’s a breakdown of ALL the accessories that I own for the Fujifilm x100v at the bottom but read on for some details on my chosen 5 favourites and some extra little bits of info on X100v practical use.

You absolutely need the lens hood and accompanying adapter ring. I actually don’t mind a bit of flare in my photographs. I picked up the Fujifilm X100V to give me a 35mm experience both in look and physical feel. However, the lens hood does more for the X100V than you might think.

Firstly it protects the static (non-replaceable!) 23mm lens from bumps and scratches whilst it’s on your shoulder. Secondly, when it’s paired with a UV filter (I grabbed a cheap but great Gobe one) it makes the Fujifilm X100V weather sealed. I’m not sure how great the weather sealing is on the X100V but the only moving part that could intake water looks to be the lens. The filter attaches to the hood adapter ring, not directly to the X100V. If you attach it to the camera, it will physically stop it from focusing and you can risk damaging the focus drive.

Check out the Lens Hood

One of the most underrated Fujifilm x100v accessories for sure this is. The grip on the X100V feels slightly lesser than earlier models. I often walk with it in my hand and it felt like it may slip out so I joined the thumb grip crew to get a better handle on it.

At the time of purchase I couldn’t find an X100V specific thumb grip but luckily picked up this long one from Amazon and it fits perfect. It does slightly inhibit the rear thumb dial. I don’t use that dial but if I did I could still control it, just. It’s SOLID, it’s made of some fancy metal and matches my black X100V. It’s super smart and there’s also a silver one here (Amazon).

Check out the Thumb Grip

I use a screen protector on every screen I own. Often I’ll resell my gear after I’m done with it and no-one wants to buy a broken/scratched screen. This one works great (even if I did apply it badly) with the touch screen (how cool is the touchscreen!?). Get one.

Check out the Screen Protector

I have been a pro-photographer for 12 years and I’ve never bought an “official” battery. In recent years I have bought the double battery packs with their own USB charger. The cost of two batteries AND a charger is under half the price of a single official battery. I picked this one because I like the LED display, it’s a cool blue colour (yes I’m that picky) and shows the level of charge clearly.

The USB chargers are great because I can travel with a large power bank and charge from them too. You can also charge the Fujifilm X100V from a power bank too! I use Anker Powercore 20000mah power pack, it’s robust, sleek and powerful. I’ve taken it across the world multiple times and is still going strong after 5 years.

Check out the Batteries

Honestly, I don’t own these but I’ve had them in the past and when funds allow I will definitely re-buy them. They’re not like DSLR lenses, these literally screw onto the front of the camera over the existing lens.

I would highly recommend picking up the two conversion lenses for the Fujifilm X100V, especially if it’s your one and only camera.

The Fujifilm TCL-X100 II is the tele conversion lens. It multiplies the focal length by 1.4x basically making it a 50mm lens. This makes it ideal for shooting portraits or just getting that little bit closer.

The Fujifilm WCL-X100 II Wide Angle Conversion Lens is, you guessed it, the wide angle alternative. It multiplies the focal length by 0.8x making it equivalent to a 28mm lens. This is ideal if you’re taking it out and shooting those sweeping landscapes or urban cityscapes.

Personally, the tele conversion is the one that I’d probably get the most use out of. I think I could in a pinch, stitch a bunch of stock lens shots together to create a nice wide shot. I can’t get closer without getting closer (or using this lens converter).

There is the argument (mainly within myself) that you buy a fixed lens camera to NOT have to carry extra lenses. I understand and agree however I just love a buttery 50mm portrait from time to time. The other minor niggle is that none of your lens hoods or filters fit on the lens converters.

The Half Case – MegaGear Ever Ready Leather Half Case. It’ll stop the bumps and it’s still easy to get at and use. (Even if you do look a little like your grandad using his old Leica.) It’s got a quick access to the battery compartment too.

Check out the Half Case

The Best Camera Straps – I really loved this super soft rope strap but I took a deep dive into the best camera straps for the Fujifilm x100v and picked out a few others that are maybe more suited to others too. I actually ended up putting these on all my pro-kit for commercial work.

My 5 Best Camera Straps for the X100v

My Favourite Memory Cards – Sandisk Extreme Pro Memory Cards, they save your pictures and hopefully don’t fail. I’ve used most brands and SanDisk Extreme Pros seem to be the most reliable. Remember to buy from a genuine retailer. There are some copycat knockoffs on eBay to look out for. They’ve all come down in price a lot these days too.

Variable ND 49mm Filter – The Fujifilm X100V shoots pretty nice video actually. I’m going to pick one of these up as the built in ND isn’t controllable. I really like Gobe filters for good value vs quality.

Check the Vari ND Out

The Must Know Guide to Electric Hook Up - EHU