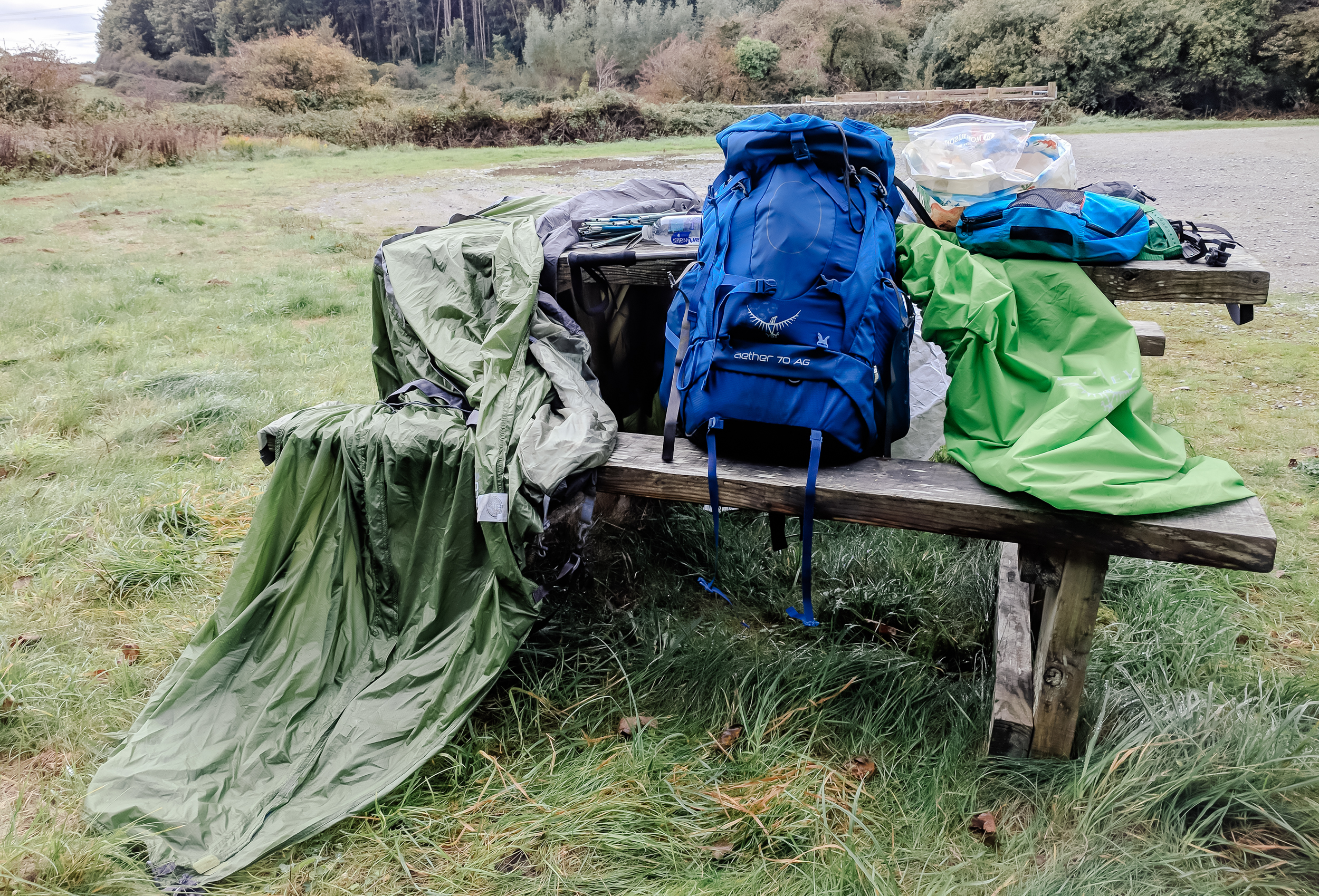 Taking on a challenge like the Anglesey Coastal Path continuous hike last year, I really thought that I’d given it a lot of thought before setting out.

Admittedly, the space between deciding to do it and actually setting off was only a few months but I poured over thru-hike videos, did numerous practice hikes, checked my gear over and over, got my feet used to hiking long distance, sorted my work life and my family plans around the time I was taking away.

But one thing I totally didn’t do was prepare my head.

I didn’t give any thought to how I would feel mentally on the hike or how to help things if I did feel rubbish. Even with a history of feeling off, mentally, earlier in the year and experiencing severe homesickness during the three week blast of driving an ambulance to Mongolia in 2011.

Three days before I left I started to feel weird. I was fully prepared. I’d got my kit sorted. I knew my route and my day to day plans. I’d watched everything I could possibly watch on YouTube for tips and had nothing left to prep. There was now no distraction and I suddenly had no ounce of excitement about the upcoming adventure. I couldn’t sleep at night, tossed and turned, lying awake. I wasn’t looking forward to it at all.

The day I left wasn’t exciting. I’d taken Finn to the children’s hospital in the morning for his first asthma appointment. Just me and him. Then I popped him back to school, picked up my pack and got the two trains to Holyhead. I fought tears back on the train. I could feel and imagine this space between myself and the family expanding and that’s when I first got stuck in my own head on the walk.

Once I got to Holyhead, there was the task before me. Grab the map, find the start point and start walking as fast as I can before nightfall to find a pitch to sleep. It pulled me out and into the present. I walked, pitched and fell asleep shattered both physically and mentally.

I awoke in the rain, pouring, driving rain and in the dark. I didn’t eat or drink anything and just left immediately with thoughts that an angry farmer was going to stumble across my tent in the dark. Ridiculous in hindsight, a very real concern at the time! Trudging through marsh and bog by headtorch I had a torrid day of walking 20+ miles in dreadful conditions. My coat failed, everything got soaked, I was carrying a wet tent, wet bag, wet everything. I put my head down and trudged throughout, there are no real spots of shelter on the path. The one place I’d planned to break was shut, the public toilets closed too due to the off-season. I pressed on right through and pressed right back into my own head again.

It just happens. Despite being parallel with the Irish sea, roaring waves and wind, I felt clouded and claustrophobic, tight in my mind. I couldn’t believe that this was potentially how the next 10 days would go. My focus on the path blurred and the only time I would lift my head was to look at the map briefly. This was typical of most days on the hike.

Feeling this way does nothing for creativity and motivation. I completely lost my desire to put effort into filming. I would just grab my phone or little camera, try and record anything at all to just document that I’d been at a certain point but even then sometimes I’d not bother. One of the main reasons for going out there was to create a half decent film of it all and some other bits and bobs focussed around the area and the kit I was carrying. I absolutely didn’t want to anymore.

I was thinking about tiny little ordinary moments of home life constantly. The sound of the kids giggling from the living room. Laying the table for dinner. Talking through everyone’s day’s at work/school. Even really REALLY mundane stuff like hanging the laundry up and letting Jasper out for a wee. All these little tiny bits that build our every day lives suddenly came to forefront of my mind and I missed them all.

A bit of context…

Earlier in the year it felt like the world got on top of me. A combination of current affairs and an intense work schedule alongside concern for friends and family made me feel helpless. Whilst I’d learned to tackle this through lightening my workload, it definitely made me spend and treasure more moments with the people I love.

I’d started thinking hard about this again and I was weighing up what positives there were doing the walk vs missing precious time with family and friends. I lost perspective and I lost a sense of time. My head was going into overdrive and it was ruining every moment and making me wish my days away.  At around 5pm I found myself sat in a guest house in tears. That second day had felt like two weeks and all I could think about was what was happening at home and how I wouldn’t be there to experience it for another 10 days.

Learning to deal with it

One of the biggest realisations after lots of back and forth with friends and family via Whatsapp was that I would lose all sense of perspective and timescale. My brain would weigh the cons heavier than the pro’s at any opportunity. The walk and my time away was really not a lot “in the grand scheme of things” and my position was nothing compared to folks who live away for months on end etc. Notably the chord that stuck the most was from my Dad who snapped me out of it on that second night by reminding me that I was doing this walk to raise money for folks who suffer mental anguish and complexities much worse than what I was feeling. It sounds a little brutal to rate levels of mental health as they’re all so unique and effecting to different people but it certainly jarred me out of the cloud to see a little clearer and avoid quitting the whole walk.

It became clear that the only way to deal with it was to distract myself as best I could.

In the following days I downloaded numerous podcasts. Mainly choosing light listening things that I could drift in and out of if need be. I tried listening to some long form story podcasts such as the much acclaimed Serial but I found my brain wandering and having to go back and rewind bits all the time. I mainly hit good interview shows like Marc Marons WTF, Desert Island Discs and The Anfield Wrap (for LFC fans). Music was a bit hit and miss for me as it still allowed my head to drift way off and sometimes it even made things worse. There were points in listening to a set of podcasts that I’d dread them ending because suddenly I’d be back on my own with nothing to occupy my brain again.

I’m a photographer, so I tried to turn to it to help me out, occupy my mind and hands. Sadly we had gale force winds that week (with a huge storm at the end) which meant no droning and boring grey skies for most of it too which didn’t really lend itself to inspiring landscape photography and I could count on one hand the amount of people I actually passed on the path for a portrait series.

I found that calls from Sarah and the kids were awful, they made things much worse for me and we often opted to just Whatsapp each other. A few other great friends (Ben + James) coupled with my Mum and Dad were in constant contact with me and that helped massively in keeping my mind off things and keeping me in check.

I just took each day as it came. The goal was just to get to the end of the day, then I’d be one day closer to meeting the family. I would go to bed early and get up early too. I did briefly go through a phase of drinking every night but that totally didn’t work and infact made things worse. I ended up not sleeping well and waking up in the middle of the night a lot, when of course my head would kick off then too.

As the days went by things got a lot easier. The weather perked up a little too and I made a decision to blast through a day or two by cramming more miles into the days and changing where I’d planned to stay each night. I managed to shave two days off in total which was also great as a huge storm rolled in the day after I finished.

It was the kindness of people in the closing stages that really made things better. When I told people on Instagram that I was having a rough time I was inundated with support. I can’t thank all those people enough it really meant to the world to me. Just talking about anything was brilliant, nothing fancy, no immediate explicit sympathy, just occupying my mind with chat. I got to know so many followers that week. I’d also again like to thank those people that donated warm, dry places to stay, as much as I loved camping (and I really love that Vango Makalu 2) I really found this so comforting particularly after the big days.

I think that homesickness isn’t really the right word to describe how I felt on this hike in the end. I don’t get homesick, I get peoplesick I guess?

In hindsight, I felt lonely, bored, tired and sorely missed my family. It wasn’t my home or the town or work. It was people and living my life with those people that I missed and now hold a little closer again.

I realise this blog doesn’t offer any solutions as such but I did find a few other good articles that maybe suited.

Why Hike the Anglesey Coastal Path?

How to Camp with a Broken Limb